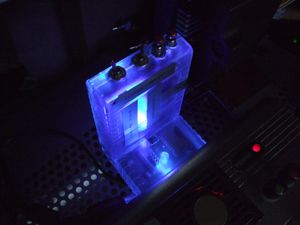 Written by Daniel Kahlin <daniel(AT)kahlin.net> - Thanks to him for allowing us to put all his stuff up here!

SUPERFLUID is a basic extension, freezer and machine language monitor for the C64 or C128 with a Retro Replay (or compatible) cartridge.

It was written from scratch taking ideas from various sources. The general handling is inspired by Datel's Action Replay series. The monitor is inspired by HESMON/CCS MON, but tries to generalize address and range handling. It also tries to improve on what is visible (and how) in the frozen state. Some of the ideas on monitor address parsing were inspired by Graham's The Final Replay.

SUPERFLUID Manual should have the latest documentation as provided with the most recent release.

As usual we package everything into one _all_ archive but here we of course also offer the original release files as well: