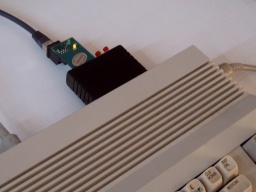 text included from the The Final Replay Homepage courtesy of John Selck (Graham).

The Final Replay is a new ROM image to be used with the Retro Replay cartridge and the RR-Net ethernet adapter. This ROM is an attempt to combine the advantages of the two major cartridges for the C64, the FC3 and AR6 and bring it to the Retro Replay. Unlike the existing Retro Replay ROM this cartridge does not build upon older cartridge ROM's but is written from scratch.

The ROM itself can be flashed with the Flash Utility V3.8p. Please keep in mind that the network settings stored inside this ROM have to be modified before flashing. Read on to learn more.

Use the SETIP.EXE tool to set the IP inside the ROM. Linux users will have to compile the setip.cpp file (using g++ setip.cpp).

NEW: ReplayConfig supports setting up The Final Replay as well.

The network device which comes with the TFR is accessible via device number 6. It can be used to access a directory tree on a PC with the server running. To use it, enter DOS"6" to change the device number to 6 or enter NET to redirect other device numbers to the network drive.

Before you can access the PC Harddisk, you need to start the Network Drive server. It is required to set a root path via the command line parameters. Example:

It is not possible to access any files outside this root path, so your other files are safe.

You may enter subdirectories via sending a DOS command: DOS"CD:(dirname)" You can also enter D64 files as subdirectory, but currently only read access is allowed. Currently no other DOS commands are supported. No deleting of files, no renaming of files and no formatting of disks.

An important feature of most cartridges was their machine language monitor. Also this cartridge comes with one which is similar the the FC3 monitor. It is activated by entering the MONITOR command which is also available on the F2 key.

Almost all monitor commands refer to the currently selected memory. One exception is the G command which always refers to the C64 CPU and the T command which allows redirection of the target. Example:

The monitor allows binary, decimal and hexadecimal numbers as addresses and arguments:

Scrolling through memory is possible in upwards and downwards direction by either using the cursor keys or via F3 and F5.

CodeNet is a special transfer server which allows sending of binary data or program files directly into the C64 memory and sending of an execute command. You can use it for easy cross assembling. The server is started by entering the CODENET command (available on the F6 key).

The Final Replay comes with a network server dedicated to cross assembling and remote program execution. It is started upon entering the "CODENET" command which is also preset on the F6 key. The server is used from a remote Windows or Linux PC only via the CodeNet client. It can be used to transfer PRG files directly into the memory of the C64 and also allows some other actions like filling memory and ofcourse starting a program with RUN or a jump to a defined memory address.